BLOG
You are here: Home / BLOG / Uncategorized / A Look Back at the 2013 Harvest

www.mawinemaker.blogspot.com), you’ll have read a few posts about the 2013 harvests and fermentation in the Aaronap Cellars winery.  Now that our new website is up and running with a new blog specifically dedicated to the workings of Aaronap Cellars, I thought I’d provide a recap of last year’s winemaking efforts and share some of what’s been going on over the winter. The winemaking year started off in May with the arrival of maple syrup from the sugar maples in the Berkshire Mountains of western Massachusetts.  This is the key ingredient for our sweet and delectable Forest Gold maple wine that will be released very soon (more on that later). Spring also brought the arrival of grapes from South America.  I proudly import carmenere and malbec grapes from Chile for several reasons.  Foremost, it allows me access to Chile’s signature grape, carmenere, which is not grown in commercial amounts in the United States.  That’s a pity because it’s a grape with some unique qualities, tastes, textures, & aromas (more on that later, too).   Another big reason that I work with South American grapes is that it allows me to spread winemaking throughout the year.  That’s a big plus working in a small winery where space is at a premium! Fall brought more treats and treasures.  I am pleased to report that I was able to source some premium chardonnay and pinot noir from Westport Rivers Vineyard here in Westport, Massachusetts, as well as a small amount of merlot and cabernet franc from a very special vineyard in Rhode Island.  2013 started off as a potentially difficult year for grape growing in New England with nearly incessant rains in spring and early summer.  However, late summer & fall brought warm temperatures and dry sunshine that allowed the grapes to ripen and aromas to fully develop.  You have to smell & taste these wines to believe it, but 2013 turned out to be an almost classic year for grape growing in New England. Vineyards on the West Coast also faced some challenges in 2013. A hot dry summer meant fast grape ripening & the prospect of an early harvest, but September abruptly cooled down and slowed sugar production while flavors developed.  We brought in a number of grapes, including viognier, merlot, and cabernet franc from the Yakima Valley in eastern Washington.  From California came petite sirah and cabernet sauvignon from the Suisin Valley and petite verdot from Paso Robles.  I am very excited about the syrah I was able to source from Sonoma Valley’s Durell Vineyard and the zinfandel from the Shenandoah Valley in Amador County. Needless to say, things were a little busy in the winery! [caption id="" align="aligncenter" width="320"] 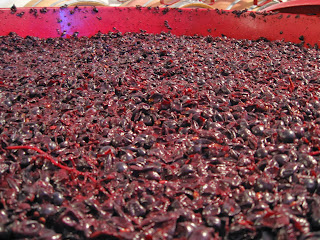 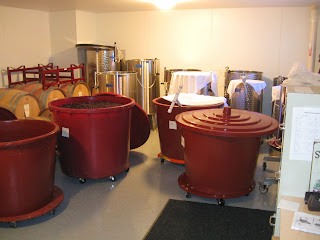 Lots of fermentations in the cellar![/caption] [caption id="" align="aligncenter" width="320"] 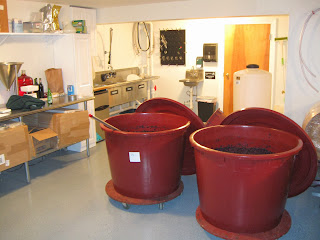 More fermentations![/caption] In the end, 2013 was a very good year for our first major harvest season.  I was able to source 30% of my grapes from right here in New England.  Stay tuned for the release announcements of these special “Southeastern New England AVA” wines.  I believe that you’ll be very surprised how good wine can be made from grapes grown in New England.  Lots to look forward to as these wines mature and get ready for bottling.]]>

You started a suburban winery…where? PS Project….What’s in a name?
Scroll to top